If you visit Camp Anerley today, you would never guess that it used to be a lowly, very swampy chicken farm, but that it was until 1927 when this 9,3 hectare chicken farm began it’s incredible transformation.

The Student Christian Association (SCA) had been holding boys’ camps on the Natal South coast for some years and were now eager to own their own campsite.  A group of young camp leaders, Hoffie (Jan Hofmeyer, former Prime Minister of South Africa), Reg (R.O. Pearse), Army (Cyril Armitage) and Alan Paton (author of Cry, the Beloved Country), knew it was the place the SCA had been looking for the moment they saw it!  With the help of Hoffie, they bought the lowly chicken farm for £ 1500.00.

Before they could start camping at this wonderful seaside spot, they needed a hall, and so, soon after the property was bought, work began on what came to be known as the “Tin Temple”, a square hall with three rooms along either end, constructed with wooden floors, corrugated iron walls, and a roof made from tongue-and-grooved floor boards covered with black malthoid sheeting. 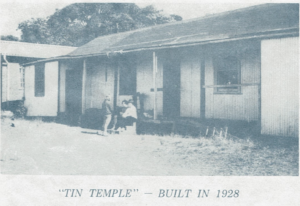 Once the Tin Temple was up, Camp Anerley was ready for its first camp.  In July of 1928, a host of tents were pitched on the grass in front of the Tin Temple for the boys’ sleeping quarters and an open-ended tent with a fly sheet was erected as the cook house.  The lowly chicken farm was starting to give way to something very exciting indeed.

Thus, the boys spent their annual camps at Anerley until the girls arrived in 1949.  G.G. and her girls ushered in a new era at Camp Anerley as they brought with them the frills and little comforts that the boys had never bothered about.  As you can imagine the camp didn’t stay “rough and ready” for much longer.  Fund raising had been underway for a while and the girls brought with them the last of the funds that were needed to make the much-needed improvements.

The Ablution Block was undertaken first, a ladies’ toilet and shower block abutting a shower, urinal and four toilets for the boys.  Next came the Kitchen and Tent Storage block.  This led out to the eating area under a magnificent umdoni tree (the “monstrositree” has stood the test of time and still graces the eating area today).

Once the site became popular and groups other than the SCA began to make use of it, a caretaker became necessary. Thus, Mr Goodland was hired at 2 guineas per camp to cut the grass when needed and to usher in the campers when they arrived.  He was succeeded by Mr Lowe in 1953.

A very lucky (or should we say blessed) and rather large improvement came in the 1960's when Bendigo, the local health committee, approached the management committee about using the swampy area down from the Tin Temple as a landfill area.  It was agreed to, as long as they saw to making the area clean and healthy after dumping.  This they did and trebled, if not quadrupled the camping area at no cost to the campsite.

Camp Anerley was now the much loved home to many different camps.  It was only fitting that the SCA team up with some of them to share the responsibility of maintaining and developing it.  So in 1964, they formed the Anerley Trust together with the SU (Scripture Union).  This Trust would later be joined by members of other Christian Organisations with a heart for Camp Anerley.

By 1968, the Tin Temple, that had served so many camps over the years, was in dire need of replacement and so a new brick hall was built in its place.   This was followed by a caretaker’s cottage which was built in 1972 to accommodate the new full-time caretaker.

1978 saw the last tented camp as the brick bungalows went up.  These consisted of two big rooms furnished with bunk beds and separated by a toilet/shower block. By the end of 1979, Camp Anerley had sheltered accommodation for 100 campers.

Over the past 30 years many have seen many exciting improvements and additions under the supervision of Doug and Dorah Gold from 1985 to 1999 and their daughter, Jenny and her husband Ian Moore from 1999 to 2016. From a lowly chicken farm, to today, 90 years later Camp Anerley is a fully functioning Conference and Youth Camp Centre,  the story does not end here - there is still much to be done.